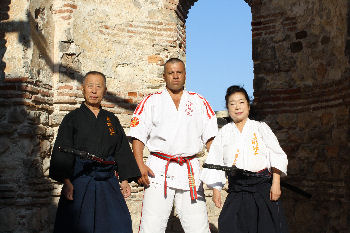 It is an honor to inform you that in June 2012 National Federation “Bulgarian Kempo – BULKEMPO” hosted the First traditional Iai-jutsu / Bulkempo seminar “Shinken – 2012”.

Special guests and heads of training were Japanese Budo-legends Sekiguchi Komei Sensei and Noguchi Sensei. They are one of the most prominent representatives and propagators of the samurai’s fighting spirit and traditional Japanese culture in the world.

Sekiguchi Komei Sensei is the 21st generation samurai. Noguchi Sensei is a President of the Japanese Traditional Iai-jutsu Association and 8th dan in Iai-jutsu. They both have dedicated their lives to traditional Japanese martial arts and virtues, spreading their philosophy and spirit among the representatives of Budo-disciplines on all continents. Simultaneously, Sekiguchi Komei Sensei conducts international trainings of famous government law enforcement structures struggling against organized crime and terrorism.

For 10 years Sekiguchi Komei Sensei observes the evolution of Bulkempo, its specificity and its bright recognition in the world of martial arts. He knows excellent the founder of the Bulgarian combat style Velin Hadjolov. He determines him as a samurai. Give him the name «BURUKENSHIN» (“Bulkenshin”) – “The heart of the Bulgarian fist” and encourages him diligently to follow bravely the Way of the warrior.

Honor for us and a great pleasure is to inform you that this year has marked the beginning in co-operation and mutual support between Bulkempo and Iai-jutsu.

A new beginning … a strong challenge that will make us better, stronger, brave and compassionate, opening our hearts to face the truth.

We would like to express our sincere thanks to Sekiguchi Komei Sensei, Noguchi Sensei and Master Velin Hadjolov for shared moments of valor and honor, illuminated by the power of the worrier’s spirit.