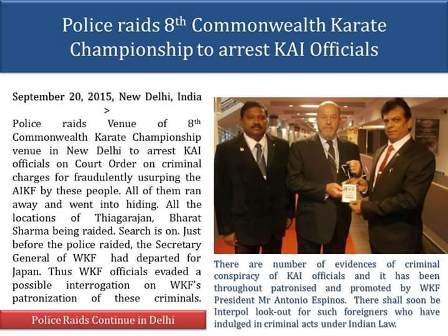 Police raids Venue of 8th Commonwealth Karate Championship venue in New Delhi to arrest KAI officials on Court Order on criminal charges for fraudulently usurping the AIKF by these people.

All of them ran away and went into hiding. All the locations of Thiagarajan, Bharat Sharma are being raided. Search is on.
Just before the police raided, the Secretary General of WKF had departed for Japan. Thus WKF officials evaded a possible interrogation on WKF’s patronization of these criminals.

Red alert has already been issued against Mr Thiagarajan, Bharat Sharma, Altaf Alam and other top functionaries of KAI- Karate Association of India for their indulgence in criminal acts of forgery